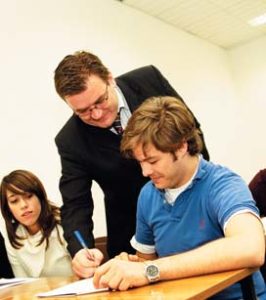 Intrinsic motivation is based on three foundational principles:

Out of the 3 autonomy is the most important.  Autonomy is not about going it alone – kind of like the rebellious teenager, but rather autonomy refers to being able to act with choice.  More specifically when we talk about students (or anyone for that matter) wanting more autonomy what they generally want is more choice or control over their:

I have found that you can use a student’s desire to have more autonomy in the classroom in many ways.  Here are just a few ideas for you to consider and try out in your own classroom.  When you do I would love to hear about the changes it made with your student behaviour and classroom management in general.

1.  Allow the students to set their own assignment.

Here is how I do this.  At the end of a topic I ask the students to go back over the work we have covered and pull out one aspect of the syllabus that has interested them and then I ask them to do some more research on that topic.  The marking criteria reflects their ability to choose a topic of interest and be able to research further.  I have seen a massive increase in student engagement and student motivation by using this technique.

As a side note…there are always a few students (10-20%) who either can’t handle this freedom or don’t want to have to engage their brains and would rather a series of questions that they have to find the answer to.  This is ok  just have something up your sleeve for them.

2.  Allow the students to choose the method of presentation.

I allow my students to be as creative as they want when presenting their assignment.  I recently finished World War 1 and 2 with my year 10 students and asked them to choose an aspect that interested them and do some further research.  They could choose who they worked with – they just had to produce something by the deadline.

Now these students are not easily motivated or engaged in their work but here is the range of presentations I received:

Most of the students were so engaged and intrinsically motivated that they asked for an extension; not because they had wasted time but because they we interested and wanted to do the best they could…which leads to the second foundation of intrinsic motivation in students – mastery.

We will look at this in the next post.

How have you used autonomy in your classroom?