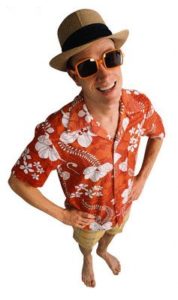 Not one to throw anything out, my dad always used to say “If I keep that shirt long enough it will come back into fashion” to which my mum would smile and throw it out when he wasn’t looking!

Now, I am not sure if the Hawaiian shirt or shoulder pads with hot pink leggings will ever make a comeback but I think it’s true enough to say that some things do have a life cycle and seem to emerge from no-where. Everyone jumps on the ‘new’ bandwagon and enjoys the exhilaration of being an early adopter; that is until someone older (and in many cases wiser) ruins the party with age old “that was around when I was a kid”.

Speaking of things making a comeback.  You must admit that the re-emergence of the Smurfs has been pretty cool! I haven’t seen that many parents at the movies with their kids in a while…

Back to the Hawaiian shirt...I was talking with some teachers today about the previous blog post and the implications of technology such as Siri (iPhone 4S) might have on teaching trends in the classroom.  As we were chatting it suddenly occurred to me that I am now increasingly using voice recognition technology in my classroom.  Programs such as Siri and dragon dictation are fantastic for students who struggle with a disability or are learning English as a second language, both of which require the students to speak and listen.

So I’m wondering…what are the chances that the visual teaching fad is over and and the next teaching trend will be auditory learning?

Just in case that by some wild fluke it does happen, let me just say – That’s how we used to learn when I was a kid…and…you heard it here first…

But seriously, do you think that the other learning styles (Auditory, Kinaesthetic, Auditory digital) might become more popular again?