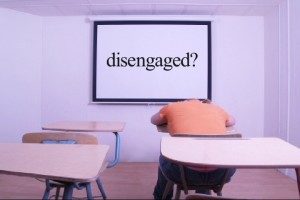 In this post I referenced a statistic that said that studies show that on average 50% of students are not engaged, 20% are actively disengaged – the reason – not interested

In Dan Pinks book ‘Drive – the surprising truth about what motivates us’ he suggests that the reason they are not interested in their studies is because we have taught them not to be.

In his book he describes an experiment conducted by Deci and Ryan in 1969.

In the experiment they brought in two groups for a one hour session over three consecutive days and gave each group a Soma Puzzle.

After they had completed the three puzzles the researchers said that they wanted to give them a forth but had to go away for a few minutes and decide what one.  The researches left them with the puzzle and a copy of time magazine, the New Yorker and playboy.  Deci and Ryan then left the room for eight minutes and observed what the participants did.

On the second day Deci and Ryan repeated the experiment, but this time they told one group they would pay them equivalent of $6 for each puzzle (the other group just got new drawings and no offer of pay).

On the third day no pay was offered to either group.

Here is what Deci and Ryan found:

In the first session both groups continued to play with the puzzle for average of four minutes before going on to something else such as reading the magazines.

In the second session the group with no pay had no difference in the amount of time spent playing with the puzzle (about four minutes), but the payed group becomes more interested and on average plays with the puzzle for five minutes – no real surprises here!

Things got interesting on the third day.  The unpaid group actually increased their engagement and time spent playing with the soma puzzle.  However, the group that was payed in the session beforehand but received no pay this time only engaged with the puzzle for an average of two minutes which was a dramatic decrease on their initial session when there was no expectation of being paid.

What does this mean to us as teachers?

Deci and Ryan concluded that external rewards can act as a short term motivator (just like a coffee) but the effects wear off.  Not only do they wear off but of more concern is the tendency of rewards to reduce a person’s long term motivation to continue on a project because they are no longer INTERESTED.

An example of this in the classroom would be if you reward a student for reading three books, they will read the three so as to receive a reward but they are unlikely to pick up a forth.

If this is the case, then as teachers we need to be aware of the benefits and limitations of using external rewards on our students considering the long term impacts of our classroom management strategies.