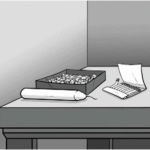 Carl Dunker devised an experiment called the candle problem in the 1950’s.  In it he gathered a group of individuals, gave them  a candle, some thumb tacks and a box arranged in the way pictured above and told them that their job was to attach the candle to the wall in such a way that the wax didn’t drip on the table.

Dunker found that the people would try all sorts of creative ideas such as taking the thumb tacks and tacking the candle to the wall or try to melt the wax onto the wall so the candle would stick.  Eventually after an average of 5-10 minutes the participants worked out that if you emptied the box you could tack the box to the wall and put the candle in it (See below)

Sam Glusburg later took this idea and developed it.  Glusburg broke the participants into 2 groups – One group were not offered a reward.  The second group were told that if you are in the top 20% of the fastest people to solve the puzzel you get a $5 reward and if you are the fastest at solving the puzzle you will get $20.

So what were the results?

Glusberg found that the group that was offered the reward took on average 3½ mins longer!   This makes no sense!  Everyone knows that if you want people to perform better you reward them right?

Glusberg got a new batch of people and repeated the task – this time he set up the candle problem in this way (see below).

How did the rewarded group do with this new set up? They actually outperformed the group where no reward was offered.

What’s all this mean?

If you are going to reward – make it unexpected, and not a direct result of some work or intelligence.  In other words it is much better to reward attitude and effort not result.

To read more on this subject see this one.